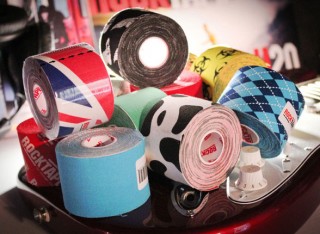 What does it do?

RockTape is a premium brand of kinesiology tape. Originally used by acupuncturists and chiropractors in Japan, kinesiology tape is used by a wide variety of health professionals all over the world to treat injuries and pain.

How does it work?

Most traditional athletic tape that binds doesn’t stretch, ROCKTAPE is engineered to mimic the human skin. This stretchiness is the secret behind ROCKTAPE. ROCKTAPE stretches up to 180% of its original length but has this amazing ‘snap-back’ or recovery. This is what makes ROCKTAPE the best for performance advantage over other tapes.

RockTape can be used in several different ways to achieve different benefits:

• Fluid Effect: Causing decompression the tape promotes a more normal fluid dynamic in the taped area. Swelling is then able to flow out of the area, taking toxins with it which result from inflammation and injury. Also blood has less resistance to enter the area bringing with it more oxygen and nutrients vital for healing and recovery. This fluid effect is probably behind the dramatic improvement in swollen and bruised tissue that is often seen when Rocktape is applied.

• Mechanical Effect: As pressure on the vertical layer cake of tissue between skin and bone is reduced more normal slide and glide mechanics between the layers of tissue is restored. It’s pretty likely that this is the mechanism that can allow someone who can only bend as far as their knees touch their toes in an instant!

• Neurological Effect: A lot of pain generated by movement or muscle contraction is generated by nerve endings in the space between the skin and muscle. As tape decompresses this space there is less pressure on these nerve endings so is reduced or stopped completely at its source. Having elastic tape stuck to your skin is also believed to stimulate receptors within the skin called Mechanoreceptors. These receptors play a part in our movement awareness, or what therapists call Proprioception. Many therapists believe that one of the main effects of applying ROCKTAPE is to improve our Proprioception, which can both decrease pain and improve the way we move.

When Rocktape is applied with more stretch it can be used to support areas where tissue has been strained, torn, weakened or lengthened. By adding more elastic recoil to the taped area, functional stability and tissue ‘snapback’ are enhanced.